The shad kill occurs during the winter months.  Depending on the water temperatures in the lake, it can start as early as mid December and last as late as April.  It's arguably the best opportunity to hook into a trophy fish! The action during a good shad kill is usually worth enduring the cooler weather.  Plus, Arkansas winters are mild compared to much of the country!

The colder nights cause the surface water temperature of the lake to fall.  When the surface water falls between 41 and 43 degrees, the shad will go deeper in search of warmer water.  As  this colder water drives even deeper through the water column, so do the shad.  When the giant schools of shad have gotten deep enough, they're sucked through the turbines at the bottom of the dam and end up in the river.  Once in the river, they become easy prey and a good food source for the trout that are waiting for them.  The trout will literally gorge themselves on shad when this happens.

Due to these higher water levels produced by the dam, the most effective method of fishing is drift fishing from a boat.  But, it's not impossible to be productive while wade fishing during this time.  The shad can be at any level of the water column, therefore we may fish any depth from the surface to 14ft. 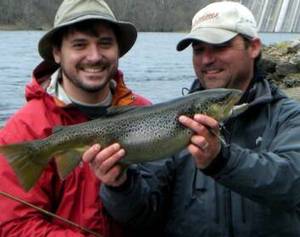